From VATSIM Germany
This is the approved revision of this page, as well as being the most recent.
Jump to:navigation, search 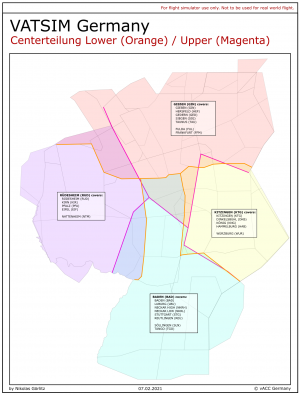 The first station to be staffed on Center is Kitzingen (EDGG_K_CTR), which also covers all the other Center positions (G, R, and B_CTR). Detailed overview for each sector and sector splits can be found here.

Enroute charts including waypoints, airways and sectors are available for the Lower and the Upper.

The LoAs can be found at https://de.wiki.vatsim-germany.org/LOAs

The Graphical LoA is used to visualize the LoAs and is no substitude for the written from. Aircraft transfered from CTR to EDDF_APP oder EDDS_APP are released for turns but not for climb/descend.

Inbounds to Frankfurt are transfered to Arrival according to the table below. Center clears all inbounds for the appropriate STAR as highlighted at the table. In this operation (called "north-north, south-south") inbounds from the north (UNOKO, KERAX, ROLIS) will fly the northern STAR and inbounds from the south (SPESA) the southern one. Inbounds via EMPAX, FAWUR and PETIX only can get a southern arrival route. Other STARs need to be coordinated with Arrival.

Inbounds to Stuttgart are transfered according to the Quicksheet. When using the CDA Transitions Arrival has to coordinate directs and the used Transition with Center.

Inbounds to EDDK are cleared for STARs according to the runway in use. On handoff the aircraft is released for turns and descend.

For FIS the following SQ-Codes should be used in the defined areas:

The following sectors descriptions were divided into our four center splits (EDGG_K, G, B and R_CTR) with each of their own very sub-sectors.

One of the main tasks of sector Kitzingen is sequenzing of inbounds for Frankfurt (EDDF) via SPESA and inbounds for München (EDDM) via DKB. Next to this there are inbound streams to Stuttgart (EDDS) via GEBNO and Nürnberg (EDDN) via ERTES and DKB. Frankfurt Outbounds via CINDY and SULUS need special attention when crossing the inbound streams. 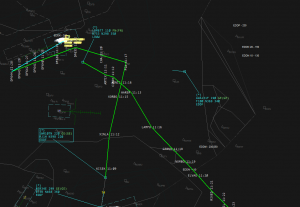 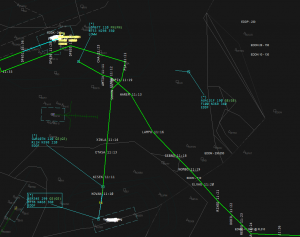 All inbounds to EDDF from the south will fly via SPESA. Therefor SPESA holds the most conflict potential in the entire airspace.

The main problem is that at SPESA traffic from EDMM and LSAS has to be merged. Additionally CINDY and SULUS departures pass within 7NM to SPESA. Traffic from EDMM should be told to reach FL110 at SPESA which leaves conflict potential with SPESA inbounds from the south.

In case of an EMPAX arrival from the south the instruction: "descend via EMPAX#C/EMPAX#B FL100" should be used. In this case the pilot will descend to reach FL100 at ADNIS. This prevents potential conflicts with CINDY/SULUS departures, aswell as conflicts over SPESA between traffic from EDMM and from LSAS

In the case of this picture BER34E descending to reach FL100 is at about FL135 when crossing the CINDY departure LDM677. Therefor every CINDY departure unknown to the center controller is a cleared conflict with SPESA arrivals from the south.

Kitzingen is responsible for combining the two traffic flows from Brussels (via MOVUM) and the Düsseldorf area (via BOMBI) at HAREM. All traffic via HAREM T104 ROKIL is handed over to München radar at DKB on FL250. These aircraft are not released for further descent due to the outbounds from EDDS crossing below to the north-east. If a deviating release is issued by Langen Radar, it must always be given by Topsky!

Routes from the Lower (no direct route) which nevertheless fly in the Upper should get a direct to DKB as soon as possible to avoid unnecessary miles.

Outbounds from Frankfurt to Munich Airport (max. FL230) can generally be transferred to Munich Radar independently of the inbounds from the Upper. If possible, however, Langen Radar should take care to sort the aircraft into the sequence.

Since on the relatively straight route through the sector only a few directs can be used to establish a sequence (max. 3 NM possible), speeds should be used on time. If necessary, headings can also be used to generate additional miles if needed (30° deviation on 30 miles results in about 3 NM). If it is not possible to generate the necessary 10 NM, individual aircraft can also be handed over at FL260 after coordination.

Inbounds Munich can also be handed over via DINKU and NOMBO only after coordination with Munich Radar, but this should only be done in exceptional cases.

Sector Würzburg handles mainly traffic in- and outbound to EDDM. Traffic to EDDM is received from all sectors at FL350 or below and should be handed over FL250 to EDMM at DKB.

Traffic outbound EDDF via CINDY will be handed over climbing FL240 from EDGG. This traffic is handed over climbing FL310 to EDMM and has to cross NOMBO FL 245 or above. After coordination with EDMM, traffic that reaches FL310 before the sector border can also be transferred directly to EDUU Isar with release for climb.

EDDM outbounds via Y101 will climb in your sector and join flows to the north or northwest. WUR can request SLN and NTM to direct EDDM inbounds direct DKB coming from Belgium. By doing so traffic stays mostly clear of FFM.

For inbounds to Zurich, there are three routes through the Baden sector. Two from the Upper (OMOGI - LAMGO - IBINI | DKB - TEDGO - EMKIL) and one for flights from Frankfurt via KRH - NATOR. Since all routes in Swiss airspace converge at RILAX and only differ by a few miles (1 - 3 NM), the inbounds must already be sequenced by Langen and ideally transferred to the COPX with a difference of 10 NM.

As soon as the inbound are within the SULZ area, they are released by Langen Radar for turns and descent to FL130.

Sector Tango will receive all departures from LSZH and other northbound traffic via (U)N851. Note, that your airspace starts at FL 235 there to facilitate this. Also you will receive LSZH inbounds via EMKIL from WUR on FL320. TGO needs to descend them FL240 at TEDGO and send them to BAD. EMPAX inbounds need to be sent descinding along the Arrival to BAD. There’s also the chance for EDDM inbounds via GESLU which need to be sent FL250 to EDMM.

One of the main tasks of Sollingen is to pre sequenz LSZH arrivals and to hand them over to BAD at LAMGO FL250. He is also responsible for all ANEKI outbounds of EDDF and southbound traffic towards LSAS. There might be some EDDM arrivals via GESLU which need to be handed over FL350 to TGO.

You may clear traffic DCT to TRA, ROTOS, WIL and OLBEN on the condition, that traffic stays clear of LFFF, TGO and west of TRA.

On Vatsim, Sector Rüdesheim takes over the tasks of the Lower Sectors RUD, EIF, KIR and PFA as well as the Upper Sector NTM. The main tasks, apart from transits to or from Belgian airspace, are the sequencing of inbound flights to Frankfurt via UNOKO, Luxembourg and Brussels as well as the minor airports Frankfurt/Hahn and Saarbrücken and other airports used for military purposes (ETAR, ETSB, ETAD).

Frankfurt inbounds via UNOKO will reach this sector on FL230 from EBBU or FL250-260 from EDYY on basically same routings. EDYY is responsible for the separation of traffic converging over NIVNU, but they don't have to sequence this traffic with them coming from FL230 (EBBU). RUD has to make sure the traffic stays clear of EDUU. Very often pilots file the routing PITES Z111 RAMOB, which is valid but does not contain UNOKO. In that case simply issue the pilot to join the UNOKO#A/D arrival at RAMOB.

There are also EDDL inbounds (EKSAK, ARPEG) and outbounds and southbound traffic on N850. This traffic can be cleared DCT to BOMBI by MUAC.

Should traffic on one of the DCTs cross FUL, please remind MUAC that traffic has to stay clear of FUL.

FUL is a small but packed sector. To reduce vertical movement in MUAC, traffic to EDDH should be handed over max FL360. Another important part is EDDF outbounds via TOBAK. This traffic will be handed over to you at FL240 and may still be below the FFM sector. In that case, traffic has to wait or you can request a climb release from FFM. Hand over traffic FL290 to EDMM or, after coordination, on a higher level to EDUU Saale.

Apart from that, norhwestbound moving traffic on L602 or L604 can be handed over on cruise.

Retrieved from "https://en.wiki.vatsim-germany.org/index.php?title=EDFF_CTR_SOP&oldid=1100"
Categories:
This page was last edited on 24 October 2021, at 11:28.
Content is available under Creative Commons Attribution-NonCommercial-ShareAlike unless otherwise noted.
Privacy policy
About VATSIM Germany
Disclaimers